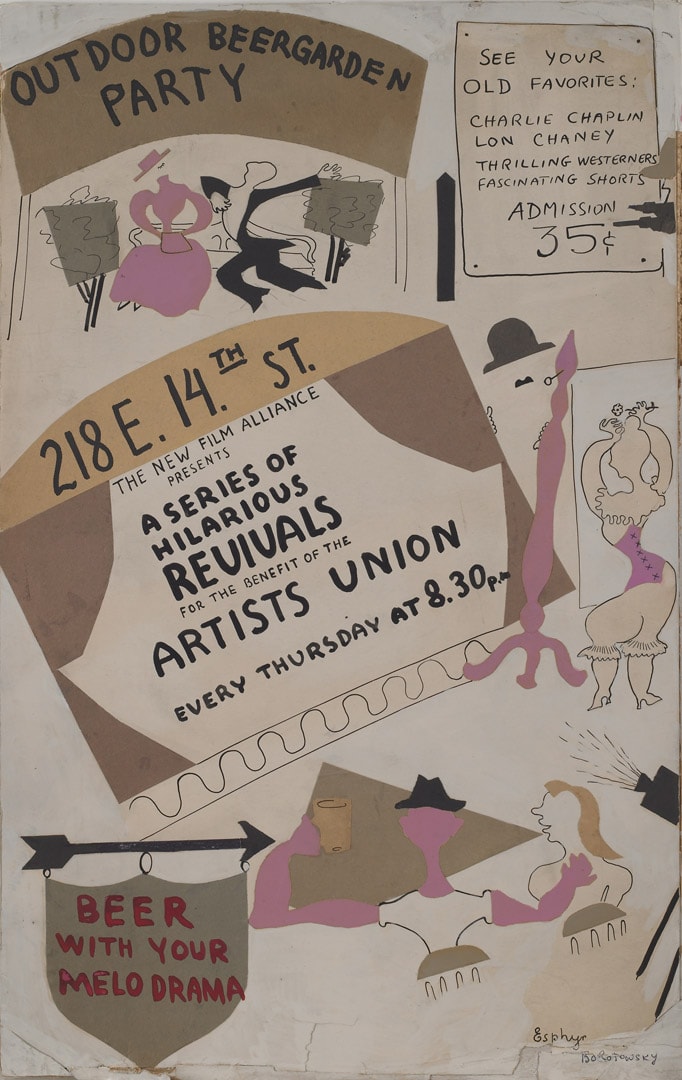 Beer With Your Melodrama

Slobodkina joined the Artist’s Union in 1934. Members of the Union included Arshille Gorky, Balcombe Green, and Stuart Davis. As Slobodkina recalls in her autobiography, many gatherings were dedicated to the debate between making socially relevant art and “art for art’s sake” (Notes for a Biographer, Volume II, p.377). Slobodkina was active in the Union, lobbying for employment of all artists through WPA projects. She took part in many meetings, demonstrations, and helped organize delegations to be sent to Washington (Ibid., p.405). Slobodkina was on the Union’s fund-raising committee, which held a number of small parties and events, as well as an annual ball. Slobodkina designed a number of promotional posters for these events, three of which survive: Beer with Your Melodrama, Latest Styles for Unemployed Men and Women, and Ambulance for Spain. She recalls: “Where there is a Cause, there is fun, and usually a lot of extra work for eager beavers like me. The first thing I remember getting myself into was the making of posters for a thing I think Gorky and his pals dreamt up. It was to be called “Beer with your Melodrama,” and consisted of showing a very old movie of the Perils of Pauline type, plus a glass of free beer. The price of admission to the little backyard garden restaurant where the whole thing was to take place, was something like a quarter or thirty-five cents” (Ibid., p.377). She goes onto explain a bit about her process of making this poster, and how it earned her respect and admiration within the group: “I was pleased with the light, frothy results of my labors, but I never anticipated the enthusiasm with which they were greeted by my fellow Union members. Months after the ‘Beer with Your Melodrama’ ran its brief course, closed for lack of a license to show motion pictures and an abundance of gate-crashers, who wanted to see the movie for nothing, people were complimenting me on the clever way I put across maximum information with minimum means. I was no longer Esther Bolotowsky, Ilya Bolotowsky’s attractive wife only. Suddenly I became Esther Bolotowsky, a capable and useful member of the Union” (Ibid, p.378).